Drawn from the real-life story of the folk painter Maud Lewis who suffered from rheumatoid arthritis, this film captures the way that art can fill challenging lives with joy.

In performances earning Maudie seven Canadian Screen Awards, Sally Hawkins and Ethan Hawke embody this unlikely pair with attention to every awkward gesture and movement. A cameo by Kari Matchett as Sandra is also noteworthy for its quiet depth and all-seeing compassion as a dependable friend. Conveying a sense of instant understanding, she encourages Maudie to sell her artwork and offers her shelter during a rough patch with husband Everett.

Unaware of Hawke’s astonishing range before this film, we were stunned by his skillful rendering of a deeply flawed man. As he shows reluctant support for Maudie’s blossoming career as an artist, the fish-peddling Everett benefits financially by claiming her earnings. In an unexpected twist with complex layers, he slowly softens in the presence of her colorful paintings of flowers and birds on the walls of his shack, which she was hired to clean.

Performance Effectively Eliciting Ire and Revealing the Complexity of Relationships

In his role as Everett, Ethan Hawke succeeds in eliciting our ire as he constantly demeans Sally Hawkins‘ outwardly fragile Maudie, with formidable inner strength, by ranking her below the dog and chickens on their farm. Prompting audible gasps, he commits a horrifying offense when he wallops her across the face. Despite his angry outbursts and cruelty, Maudie mystifyingly continues to care for Everett, revealing the complexity of human relationships.

After these painful-to-watch outbursts, surprising scenes with tender moments are painted in striking contrast. A particularly memorable one is the shot of Maudie’s bare feet atop Everett’s, as they dance slowly and wordlessly together. Another is when he scoops up Maudie to take her to the hospital after she has severe trouble breathing.

Ethan Hawke‘s haunting reactions at the end of the film, when he walks back outside and doesn’t know which way to turn, instantly communicate the profound loss of a man who finally learned how to love. At the end of the film, bonus interviews with both actors and a behind-the scenes look at the production setting in breathtakingly beautiful Nova Scotia, Canada, make the experience of watching Maudie a memorable, although sometimes troubling, one.

How did you feel about the rough moments in this film, and were they necessary? What did you think about the performances, and how did they alter your previous perceptions about the actors? What other elements coninue to linger in your mind about this film?

Share your reactions to points raised in this movie review about the folk painter Maud Lewis. Then, invite other film lovers to join Artsphoria’s Online Film Forum. 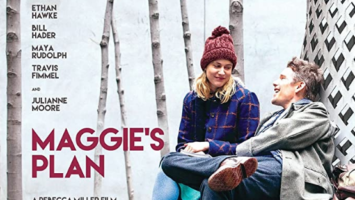