With the voice, mannerisms and style evocative of Woody Allen’s films, the actors in Maggie’s Plan are filled with angst and analyze every interaction.

From the opening discussion of artificial insemination to a scheme reuniting her husband (Ethan Hawke as John) with his ex (Julianne Moore as Georgette), the film shows an outwardly innocent Maggie (Greta Gerwig) struggling with the inability to stay in love. Although Maggie sheepishly approaches men with seemingly shy movements, she is later accused of manipulation and immaturity in facing the “messiness” of actual relationships.

Greta Gerwig is particularly fascinating to watch as an actress in Maggie’s Plan before her recent acclaim as the writer/director of the Little Women remake last year. In another divergent role showing his extraordinary range, Ethan Hawke  plays the self-absorbed and -motivated husband to the hilt. Julianne Moore captures the highly intellectual ex with hair wound in a severe bun and a precise accent delivered through tight lips.

As the characters discuss manuscripts and skate in New York parks, the city is filmed in all its grainy glory. From street scenes with the pickle man who becomes Maggie’s sperm donor to apartments with their own character, the setting plays an equally strong part in this slice-of-life story.

In an outstanding bonus segment, a Q&A filmed at the 2016 Sundance Film Festival with writer/director Rebecca Miller and some of the actors adds richness to this film experience. Of particular interest, the writer/director credits the actors with many contributions including natural improvisations, which were not in the script.

Rebecca Miller‘s thoughts about her writing process and filmmaking techniques offer valuable insights for film lovers. As she describes the movie’s development from the initial book chapters given to her from a friend, the writer/director Rebecca Miller reveals that Maggie’s Plan is her love letter to New York. 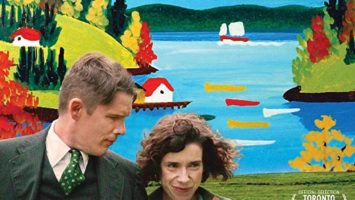